A healthy recipe for BBQ pulled pork tenderloin made in the slow cooker.

Growing up in Texas, the first time I ever had pulled pork was in college on a trip to Memphis, TN. Inspired by the flavors, but with a little Texas flair, I adapted this recipe for weeknight home use. Not quite the same as eating smoked pulled pork in Memphis, but it’s pretty good for a weeknight dinner. Plus it’s easy to make, feeds at least six, and makes great use of pork tenderloin.

By using a pork tenderloin to make BBQ pulled pork, it significantly reduces the total fat and calories in the dish. It’s not quite as melt in your mouth as traditional pulled pork, but if you are looking for a healthier option, this makes a delicious, family-friendly dinner.

Store-bought BBQ sauces vary greatly in their nutrition. If you have a special nutritional concern, read the labels, and choose one that best suits your needs. There are now many low and no sugar BBQ sauces available. Be sure you like the taste and flavor of the BBQ sauce you choose for your pulled pork.

Store leftover pulled pork in the fridge. Use within three to four days. Freeze in air-tight storage for up to three months. 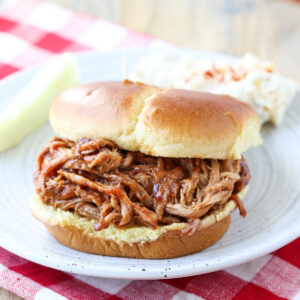 Chili Powder – If you don’t like spicy, consider omitting the chili powder as it does contribute some heat to the recipe.

Dill Pickle Juice – Can be substituted for the Apple Cider Vinegar.

Using another cut of pork – Other cuts of pork that will work with this recipe include – pork butt, picnic shoulder, and pork shoulder roast.

If you want crispy bits in your pulled pork, add extra BBQ sauce, place on a sheet pan and broil for around 3 minutes.

Can I freeze pulled pork tenderloin?

Yes, freeze in an air-tight container for up to 3 months.

Can I cook this on high in the slow cooker?

Due to the lean cut of pork used, I recommend cooking this on LOW in the slow cooker for best results.