A delicious recipe for Lighter Coffee Cake Banana Bread made with half whole-wheat flour and less sugar.

Since becoming primarily a SAHM roughly two months ago, one of the weekly activities I do with my almost two-year old is to make a recipe. I guess he has really started to enjoy that time together in the kitchen. Today, every single time I opened the pantry door he would dart in there and wrap his little arms around the glass flour canister and say “help, help”. What he means by “help” is to pour the ingredients in the bowl when we cook. He was so intent and eager to “help” that day, I didn’t want to let him down. I also didn’t have a lot of ingredients on hand, except three overly ripe bananas. Perfect.

I found a banana bread recipe from my Pinterest board and decided to make a few adjustments to make it a little healthier. My banana bread is made with less sugar and streusel topping (AKA less overall calories) and half whole-wheat flour. I have made this multiple times and everyone seriously raves about it!

Now, this isn’t the healthiest banana bread recipe you can find on the internet, but it’s a real crowd pleaser and lighter than your average banana bread. Happy medium and win in my book.

This bread doesn’t last long around my husband and toddler. My husband actually suggested that I make SIX loaves per week so “we don’t run out”. I laughed and told him I would take that into consideration …. 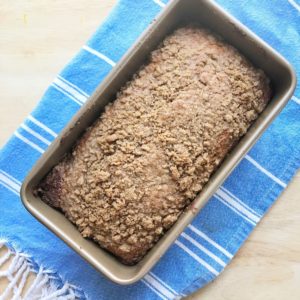 Recipe adapted from A Latte Food.
Tried this recipe?Mention @mytxkitchen or tag #mytxkitchen!