Sometimes victories come in different forms. This week for me it was a win for my Fantasy Football team. After five grueling weeks, I finally won my first game. Really it was a team effort with a TD by JJ Watt, 4 field goals and an awesome game by a Cincinnati WR. Ladies, if your significant other watches what you consider to be too much football on Sundays, I highly recommend getting a fantasy football team. It makes watching football, pre-game shows and Sports Center much more enjoyable. When you’re have a long stressful week, I have to admit it is kind of nice to talk stats and predictions about your Sunday players with your sweetheart.

My team’s victory was slightly sweet just like this Apple Pie Breakfast Parfait.

I routinely top yogurt with bananas or fresh pineapple, but this was the first time I ever ventured out and tried something new. It was a pleasant surprise. Cinnamon apples, rich vanilla yogurt and a toasty oat and nut topping made for a spectacular fall treat.

Make the apple and oat mixture ahead of time so it can chill. I recommend doing it the night before and then putting it in the fridge for the morning. If you don’t feel like making your own oat topping just substitute with your favorite granola. You’ll just be missing out on those toasty pecans and the aroma of cinnamon and oats coming from the oven. Mmmmm Fall y’all. 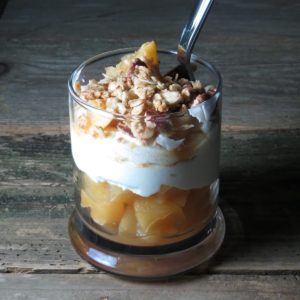 Hope you have a wonderful week and that you too may rejoice in small victories, whatever they may be.

PS - Having an apple with breakfast is a great start to getting your FIVE fruits and vegetables in.